Invertebrates make up about three quarters of all living animal species. In particular, a large proportion of animal species found on oceanic islands are invertebrates because generally they travel across ocean distances more easily than larger animals. Lord Howe Island is no exception to the rule.

Recent intensive invertebrate surveys in 2003 by staff from the Australian Museum recorded more than 1600 species, including 157 land and freshwater snails, 515 beetle species, 27 ants, 183 spiders, 21 earthworms, 137 butterflies and moths and 71 springtails. The invertebrate fauna is characterised by a high degree of endemism, with up to 60% for some groups. Indications are there may be as many as twice this number of species living on the island. 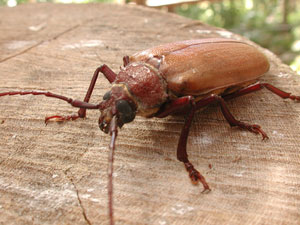 This is the largest of the beetles on Lord Howe Island, and is the adult form of the well known “witchetty grub” of mainland Australia. 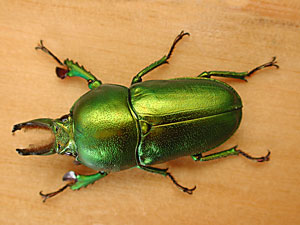 This is a rarely seen beetle but is one of the most exquisite invertebrates to live on Lord Howe Island. Like its cousin the Longicorn beetle, this species has a larval stage that lives in dead wood, eating the cellulose. In summer they metamorphose and crawl out of their timber home as flying adults with bright, metallic-green wing cases. They then fly to the tree tops to seek a mate and reproduce. 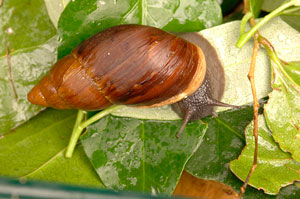 This is a large terrestrial snail, with a brown, pointed shell up to 7cm long and 2cm in diameter. Once very common in the leaf litter of the lowland forest, its numbers have declined due to habitat clearing and predation by introduced fauna. The Ship rat Rattus rattus (accidentally introduced in 1918) is considered to be the major predator of the LHI Placostylus, and likely to be a significant threat to its survival. European Blackbirds and Song Thrushes (introduced around 1950) are also thought to be predators of Placostylus. 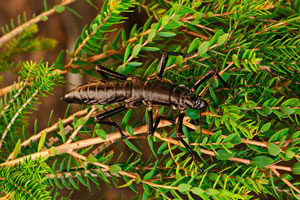 This large, flightless stick insect was quite common in the lowland forest on the main Island until rats were accidentally introduced in 1918. After that the numbers decreased dramatically through predation, and by the 1930s  phasmids were believed to be extinct. 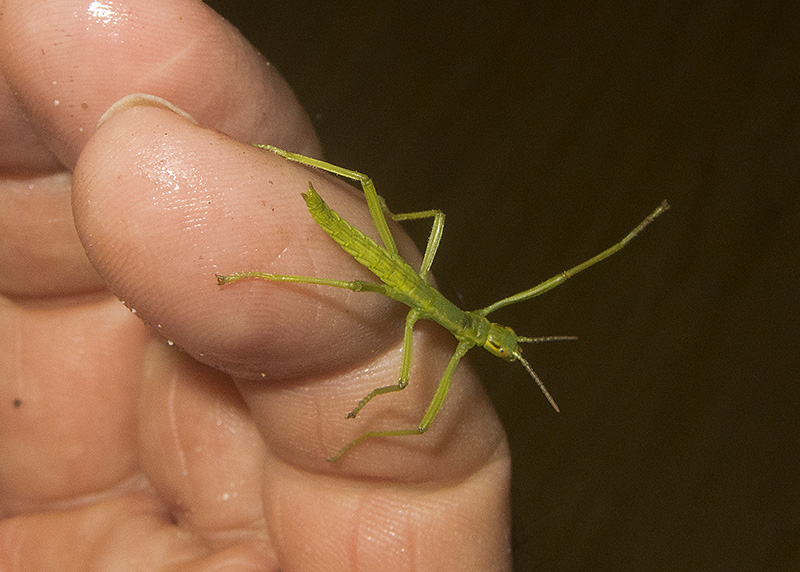 However, in 1964, rock climber David Roots photographed a recently dead specimen on Ball’s Pyramid. This raised hopes that phasmids could still be living on the Pyramid. In 2001 a scientific party visited the Pyramid and found a small population of phasmids living in a single Melaleuca bush.

Two pairs were taken to mainland Australia for captive breeding, to build up numbers in the hope rats can be eradicated from the island and phasmids be returned. Melbourne Zoo staff have been breeding these insects, and have over 600 adults. 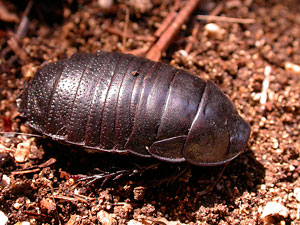 Another endangered invertebrate now restricted to the offshore islets is the Lord Howe wood-eating cockroach Panesthia lata. This large 5cm long, black insect had been commonly reported by early scientific visitors on the forest floor of the main island. However, today it is not found on the main island at all due to predation by rats but is still surviving well on the offshore islets.

There are 16 species of butterflies recorded on Lord Howe Island, seen more often during summer months. Some are quite rare and may not be breeding on the island, due to lack of food plants growing here for larvae.

Lord Howe Island has one endemic cicada; a small black species that emerges during December and January. At night you can go into the forest and see the pupae climbing tree trunks, emerging as adults, spreading their wings to dry out, and fly off in the early morning.

183 different spider species are recorded from the island. Most of these are quite tiny and live in the leaf litter, rarely seen except by expert researchers. The most common spider seen on the island is the Golden orb weaver Nephila plumps.

One of my favourites is the Bird dropping spider, which disguises itself as a bird dropping on a leaf, as camouflage defence.